The Snake is wise. The Snake is unforgiving. Understand this to prepare for the Year of the Snake. The Snake is the most complex force in the 12-year zodiac cycle and its Year presents as “unsettled”, at best. While history tells us the Snake Year has never been tranquil, it can be well spent in reflection, planning and in contemplation of long-sought solutions.

The Snake Years’ reputation for turmoil and “sharp dealings” can always be traced to missteps and excesses rooted in the preceding Dragon Year. These celestial serpents are inextricably intertwined. Unprecedented calamity struck in our last Snake Year – the 9-11 terrorist attacks in 2001. Opinions differ as to root causes, but its beginnings belong to the Dragon Year reign of 2000.

These years are always intense. It should be no surprise. Yin must follow Yang for the universe to be in balance. The Dragon Yang, as the cycle’s most powerful positive force, must be balanced by the cycle’s most powerful negative force, the Snake Yin. “Positive” and “Negative” cycle forces cannot be construed in moral framework as good or bad. Like atoms in physics, the positive and negative forces simply are.

So, how to best meet the challenge of this Snake Year? Consider the Snake.

A most ancient mysterious creature, both feared and revered. By nature, the Snake is patient and watchful, cautious but inquisitive, cunning and secretive in its hiding place; and, is most at peace in calm, cool quietude. Evolved over hundreds of millions of years to understand it is both predator and prey, its Snake radar is always on. Its eyes ever open, insinuates an ever wakeful knowing, an omniscient awareness. This is crux of the Snake’s legendary wisdom, its embodiment of esoteric knowledge and spiritual discovery.

Left undisturbed, the Snake does not go out of its way to interfere in the world. It craves the stillness of peace. But, when threatened, this most lethal of predators strikes suddenly and viciously with a merciless vengeance. It is the Snake’s remorseless intention to destroy the threat. She takes no prisoners.

So what does this mean for mere mortals navigating best outcomes for the 2013 Year of the Water Snake?

First, take advantage of what is left of this Dragon Year. Review your plans and actions in anticipation of the unexpected. Hone your insights. Settle differences or conflicts, if you can.

As the Dragon exits and the Snake begins to uncoil, there may be a sense of being slightly out of balance. Feelings become more acute and senses are heightened.
The Snake offers the opportunity to “see” more, notice more, and exercise perceptive abilities to advantage our decision-making.

The Snake prepares us for shake-ups in old realities that open the way for forward movement, refreshed understanding and growth. As the Snake sheds its skin, we are invited to release old thinking that has blocked growth and progress. This is a year with the energy to inspire newfound ambition to achieve great things.

The Snake Year is ripe for steady progress for the pragmatic thinker. Reflect, ponder and plan. Tread lightly and be more cautious. While a better year for industry and commerce, the cunning secretive Snake does love its shady deals, shrewd business manipulations, political shenanigans and coups d’etat.

More careful focus and attention to detail in legal documents and contracts are called for this year. The devil will be in the details. Speculation or immoderate gambling is taboo in this year. The Snake seeks protection in the security of safe places. This is not a year to take risks.

The Snake is transcendental in its capacity for spiritual healing of the individual, as well as the community. It seeks peace through recalibration of the karmic balance, understanding the mistrust born of chaos in which the world finds itself.

But, there is good reason for hope for in this Water Snake Year.

The Metal Element ruled the calamitous 2000-2001 Dragon-Snake cycle. Inflexible Metal is tempered in its hardness, brittle and unbending. Metal is fiercely stubborn
in its will to fight on.

The Snake counsels balance in compromise as a path to peace. The wisdom of Water may find its way.

Author’s note: This is an interpretation and analysis of the available information on the subject. Most of the culturally and referentially diverse research sources are available on the Internet. 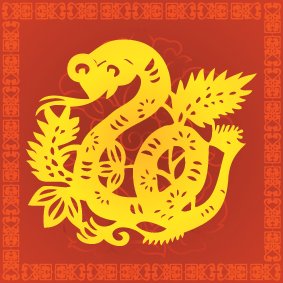